Logic Design is first and foremost a team. Each month, we shine a light on a member of the #LogicTeam and introduce you to the people behind the scenes.

She was only 16 years old by her first professional touch with the design’s world << while I was studying design graduate at Elisava I managed to work during the summer at Logic, at that time “packart agency”. At the end of my studies I returned and I can say that I have been happily motivated since 2013. I have learned everything I know from my mentor @Ferran Dachs. I have even acquired his crazes hahaha>>.

Queralt overflows with creativity and good humor on all sides. In her free time (very scarce since her motherhood three years ago) she has collaborated as an actress on the 40th anniversary of the theater group of which she was part throughout her adolescence. << I was notified for the role of “guest” in the Vernissatge play by Václa Havel, and although I have zero time I did not hesitate to say yes because I feel mega fullfilled when I do theater in my town>>.

She also continues to study for Elisava’s master in Design and the first certificate in English. Queralt: Do you have any other hobby? << In the past I could funnel my activity with basketball, I played for more than 20 years, we even became part of the second division of the Catalan Women’s league, where I sweat the shirt with @Marta Rovira Unfortunately I had a knee injury a few years ago and had to quit >>.

Queralt´s passions are drawing and his son. It is a luxury to be able to work putting your passion into practice. What do you enjoy the most about your job? <<In the projects in which adaptations and retouching have to be developed through the use of Photoshop is where I enjoy the most, because I contribute my enthusiasm for drawing. And I also am very comfortable in the brain storming sessions during the initial phases of a project >>.

Are there any clients you particularly enjoy? << I had the opportunity to take part as illustrator in an innovation workshop with our client Nestlé, and from the role of shaping ideas I really enjoyed It >> << A client with whom I feel identified and with which I work continuously, because it is a long-term client, is with @Catalònia Fundació Creactiva, I can do a break with the consumer sector to enter into the contribution of value and social responsibility >>.

A lover of cinema and graphic design applied to films, Queralt recommends that we meet his admired Annie Atkins, who specializes in the possibilities offered by the universe of design within the cinematographic world << It is very top as Annie Atkins drives to contextualize from scratch… for example the sweet Mendl’s, the signage, the passports and maps in Hotel Budapest are very inspiring >>.

We have this conversation a few days before her son’s birthday, and this “wolf” mom is going to put all her creativity into action to make it spectacular and above all fun. 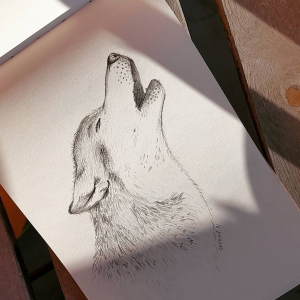 Thanks Queralt, keep it up as authentic!