Animal welfare has been around almost as long as society itself – Aristote, Plutarch and even Thomas Aquinas wrote about the issue – and it remains a hot topic today because our relationship with animals is changing. Let’s start with the animals that are closest to us: our pets. Of all the people in France who own a pet, 68% of them consider their animal to be an integral part of their family. People consider themselves to be pet parents, rather than simply pet owners, and they give their animals a lot of attention and affection. People used to get a pet dog or cat to protect their houses from intruders or pests. Now, pets have a similar or even equal place in the home to children.

However, it is not only the relationship with our pets that is changing. We are also showing more compassion towards livestock or “profitable” animals that are used directly or indirectly as raw materials. The Animalist Party (in French: Parti animaliste) received 2.17% of the votes during the last European elections in France, despite having little resources. In addition, the number of new associations created to protect animals has risen from around ten a year in 2010 to over 3000 a year in 2019. As well as activism, our compassion is also evident from our plates. In Germany, Spain and France, around a quarter of the population have either significantly reduced their meat consumption or have completely removed meat from their diets. 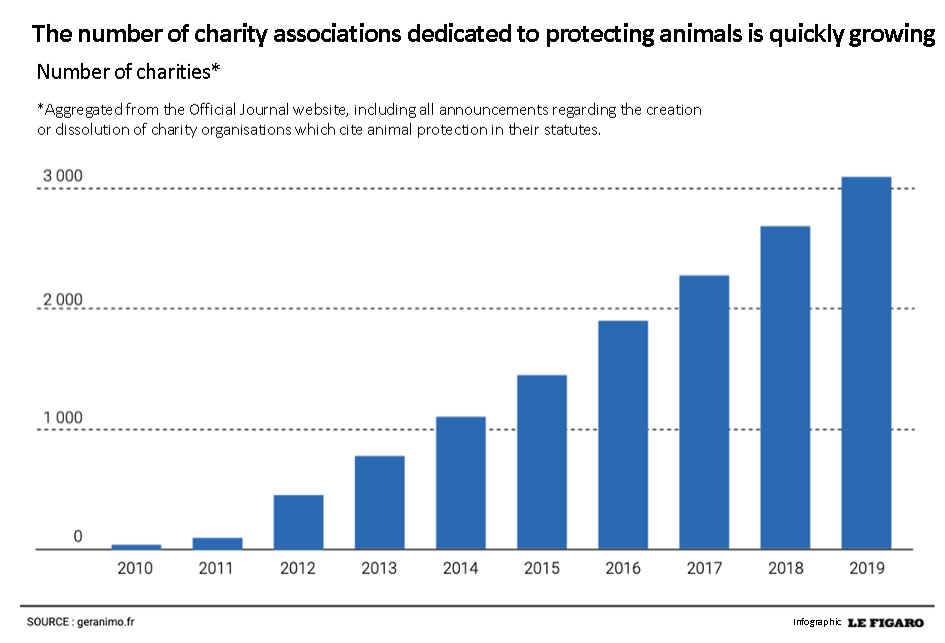 Whether for our pets or for livestock, this wave of compassion towards animals has a big influence on consumer choices. First of all, in the pet food and pet care industries, sales of new products and services, such as snacks, in specialised shops rose by 20% in France in 2020. Also, pet insurance has made over 120% profits in the United States over the last five years. Our feelings towards animals are having an influence on almost all industries. The fashion industry, which has almost completely turned its back on fur, is criticised for using materials such as leather and wool. Testing beauty products on animals is being tolerated less and less. People often decide which eggs to buy based on how the chickens were reared. Therefore, consumers are increasingly taking their love for animals into account when making decisions. For example, 75% of Americans would give up on their dream home if it was not suitable for their pet.

This affects so many parts of our economy because there are so many different types of animal lovers. Pet parents are likely to be more interested in the pet food and pet care industries because they spend a lot of money on these types of products and services. For example, veterinary consultations used to be done quickly and adequately, but now they involve detailed discussions to ensure a better quality of life for the animals. In fact, this love for our pets turns the daily lives of pet owners upside down – whether it’s work, holidays, furniture, social circle, everything must be pet friendly! Consumer behaviour is not only influenced by whether or not people have a pet at home. For antispecists, for example, preventing animal exploitation is their main consideration when they decide what products and services to buy. People do not necessarily have extreme views about the cause, but in general, they are becoming more aware of animals, and they are adapting their behaviour accordingly. Brands can adjust to this change in consumer behaviour in four different ways.

Faced with pet parents who are more demanding and more willing to part with their money, pet care brands are becoming more premium, aspirational and sophisticated in order to meet new needs. The evolution of packaging, with graphics worthy of the trendiest and most selective shops, is evidence of the companies’ attempts to position themselves as premium brands. They have also started to produce human-grade pet food, which has many similarities to the products we’re used to eating. Therefore, the industry is following the same trends as in the “human world” by offering a range of popular food products, such as Greek yoghurt and CBD, furniture or even technology, for example activity monitors and digital toys, so much so that “Pet Tech” has become its own sector.

It is not only the pet care industry that is riding this animal-loving trend. Just as certain brands have product ranges for families or children, creating a range of products for pets could be a good opportunity for development. The Hilton have launched a menu especially for dogs called “Bone Appétit”. The menu has been put together by nutritional experts, and it is available at certain Hilton hotels. Nissan has launched a dog-friendly crossover model. The car has been specially designed with dogs in mind, and the boot is equipped with several special features: an access ramp, a mini shower and drying system for cleaning dogs before they enter the car, a special anti-spill bowl, a smart dog-treat dispenser, a clip-on harness hook for safety and a two-way camera so that owners can easily interact with their pets while driving. Pet parents are not only on the look out for new products for their pets, but also new services. Insurance start-up Dalma provides cover for medical costs for dogs and cats, as well as free access to veterinary advice. Long-established insurance companies like Axa also offer a similar service. In France, pet insurance has not yet completely taken off, with only 6% of owners currently insuring their pets. In England, however, that figure rises to 35% and is as high as 80% in Sweden.

Labels are becoming more and more important, in terms of the space they take up on product packaging and in terms of the factors that affect consumer choices. Labels that indicate no harm has been inflicted on livestock are particularly popular. Garnier’s supply chain is certified as being completely cruelty free, which means they do not do any testing on animals and neither do their suppliers. Compassion in World Farming is an NGO that rewards companies that make a solid commitment to improving animal welfare. They recognize these farms by presenting them with awards, such as the Good Rabbit, Good Egg and Good Chicken awards. This initiative provides a boost for the cause that rightfully condemns the cruel and gratuitous acts of certain farms and abattoirs. People are becoming increasingly concerned about this issue, and therefore some brands are doing more than changing their labels in order to distinguish themselves. Biscuit maker Saint-Michel ran an advertising campaign stating its commitment to only using responsibly produced eggs. Other companies go even further than that. For example, the whole premise of the brand Poulehouse is that it promises to better protect chickens. Its eggs come from chickens that are not killed as they become less productive with age, which goes against the usual procedure in the industry.

#4 DISTANCE THE BRAND FROM ANIMAL EXPLOITATION

In order to appeal to consumers who have decided to only buy plant-based products, brands are finding alternative ways of making their products and launching dedicated vegan ranges and more. For example, the Bel Group have launched Nurishh – a new range of vegan cheese – in France, while in the United States, the company has created vegan alternatives for all of its brands, including a plant-based Boursin made from coconut and rapeseed fats. It is not only food that can be vegan. For example, start-up Veggiepharm already produces vegan paracetamol, antihistamines and dietary supplements, and it is currently developing more vegan medicines. Paradoxically, some of the vegan alternatives that are created in an effort to protect nature can be very artificial. Brave Robot ice-creams are made using lab-grown milk. This artificial milk resembles real milk in every aspect, including taste, texture and nutritional value, except it does not come from a cow’s udder, and therefore qualifies as vegan!

Nowadays, we have a much broader and more solid understanding of animal welfare. This requires brands to make more of an effort and to show more ambition. Fortunately, there are solutions! Whether they are in the pet care business, use livestock or produce products aimed at pet owners, there are plenty of things brands can do to transform themselves!

Your brand’s ‘Mission Statement’, or how to effectively express your brand commitment

Lidl, Decathlon and Jennyfer: the shift from being mere retailers to lifestyle brands